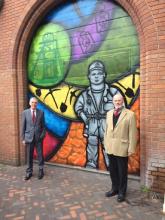 A number of Council owned roller shutter doors in Cannock Town Centre have been transformed into works of art this summer, as part of a range of environmental improvements in and around the town centre.

Cannock Chase Council commissioned Neil Willis from Auniqueart to create the artworks on 14 shutters, including seven opposite St. Luke’s Church and seven on vacant shops by the Beecroft Road subway underpass.

Over the summer, the Council asked the community for ideas and themes that could be built into the overall artworks. The completed artworks reflect these ideas and showcase the local area – past and present. The design styles include a stain glass window effect as well as traditional style murals.

Videos are available to view on the Council’s Facebook page which shows the transformation from start to finish.

The Town Centre Partnership and other local businesses in the town centre have supported the transformation and have been extremely positive throughout the process.

Councillor Gordon Alcott, Leader for Town Centre Regeneration, said: “The artworks on the shutters have significantly improved the appearance of the empty shop units and have brightened up areas of the town centre.

“I would like to thank the community for contributing towards the designs and also the commissioned artist for the time and effort spent in completing the final artworks. The project has successfully been delivered on time and within budget.

“The Council aims for further town centre improvements to be completed within the next few months, with the exception of the Prince of Wales Theatre. This will take longer to complete due to planning permission and obtaining necessary consents”

Greg Dent from Chatwin Jewellers said: “Although I was quite sceptical about the idea because I would rather see the shops open, I have to say, they do brighten the area up, and given the shops will not reopen because of planned redevelopment, it is good the Council has done something”.

Fred Pritchard, Chair of Cannock Town Centre Partnership, said: “As Chair of Cannock Town Centre Partnership I am delighted to see Cannock Council have responded to our request to try and brighten up and make the town centre more inviting with their adventurous artwork depicting past and present historical, ecclesiastical and nature themes related to Cannock and the surrounding Chase.

“This has been created by artists and painted on old and dirty shutters and brings a sense of ownership and caring to the town as well as the thought-provoking subject matter depicted thereon bringing life, colour and vibrancy back into the town.

“The Cannock Town Centre Partnership fully applauds the Council’s efforts in brightening up the town with these murals as the start of a wider Town Centre Regeneration which all take time and money to carry out and finding ready, willing and able developers in these trying and difficult times.”

Neil Wills from a Auniqueart said: “It has been great to be involved in this project and work alongside the Council to improve some of the areas within Cannock Town Centre. Using spray art is an effective way of visually improving the ambience of an area within a short timeframe.

“Throughout the transformation process, I have received numerous comments from shoppers in the town centre about the artworks and most have been extremely positive”.

This project forms part of a wider programme of environmental improvements in the town centre.

Work on a comprehensive painting scheme is also underway, items include; bollards, signage boards, directional signs, benches and railings. The redecoration will match the existing colour scheme and work is set to be completed this month.